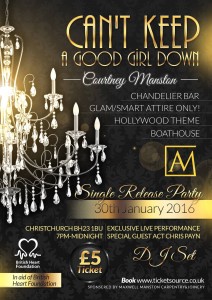 Can’t Keep A Good Girl Down by Courtney is set to be released in January. The young singer who is set to take the world by storm is having a release party for her single on Saturday 30th January 2016. The single has been described as one of the most exciting tracks in recent times and will be performed live on a tour around schools before the release date.

Bournemouth Independent based label AM is pleased to announce the new single from their artist Courtney Manston will be released in January 2016. The single titled Can’t Keep A Good Girl Down was recorded in Los Angles with two well-known producers.

The single, which is a feisty pop/rock anthem was produced by Jimmy Waldo keys from New England and Alcatrazz, an American heavy metal band best known for their song “Island In The Sun. Also on the production team was Grammy nominated producer Michael C Ross, who was nominated for single of the year ‘Thousand Miles’ with Vanessa Carlton.

Michael C Ross, who has worked with international artists such as Christina Aguilera and the Pussycat Dolls, has described the single as an exciting track that is set to light up the charts. When asked to describe her new single Courtney replied: “It is a feisty pop/rock anthem that focuses on standing up for yourself, not taking any crap and very similar to Katy Perry Part of Me with its empowering lyrical content.”

To celebrate the new single, there will be a launch party on Saturday 30th January 2016, which will include a live performance from Courtney and support guest act sign Chris Payn. The event will be held at Chandelier Bar at Boathouse, Christchurch and Starts 7:30pm-midnight. Tickets priced at £5 are available from the venue (www.ticketsource.co.uk/amstudios)

Courtney Manston, who has been described as one of the most exciting artists of her generation, is set to tour her new single around schools. The tour will give the chance for new and existing fans to Courtney perform her new single Can’t Keep A Good Girl Down.

‘I loved having the opportunity to have the first air play for Courtney. We had a great response from the listeners! She’s paving the way for new artists and young talent, definitely one to watch for 2016!’ Anna Crook Presenter Drystone Radio 103.5