The EP features a number of hooky, feel-good pop numbers through to the other end of the scale with ‘The Monster Inside’ single of the EP name delves into a vitally important, but often overlooked, taboo subject: abuse in a relationship.

Lalitha tackles this emotional subject matter from the perspective of a female perpetrator.   Lalitha’s latest project was brought to fruition via collaboration with James Grover, a producer with a background at Peak Studios, one of the UK’s top recording studios.

AM Studios’ own Chris Bailey worked on ‘The Monster Inside’ as well, and a remix of the titular single is also available featuring Don Prada, a notable US rapper.   Previously, Lalitha collaborated with top UK producer Alexis Farshi, (Snoop Dogg, Massive Attack) and the result of their efforts achieved critical acclaim and heavy radio presence.   Lalitha’s smooth, velvety vocals are elegantly accented by contemporary, modern production.

Her music is reminiscent of the golden era of 90s R&B, all while maintaining a stunning sound that’s always in vogue. 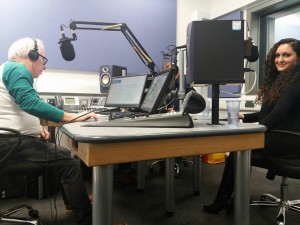 Lalitha at Express FM with Geoff Dorsett promoting 'The Monster Inside EP'.

Sell your beats online at ReverbNation.com
AM Studios